Anthony Albanese will be sworn in as Prime Minister today, the 23rd of May, enabling him to attend the QUAD summit to be held in Tokyo on May 24. The Prime Minister will be accompanied in Tokyo by Penny Wong who will be appointed as Minister for Foreign Affairs this morning.

Richard Marles will be sworn in as Deputy Prime Minister, allowing him to serve as acting prime minister while Anthony Albanese takes part in the Quad security meeting. Jim Chalmers and Katy Gallagher will also be sworn in today as treasurer and finance minister respectively. The Ministers will be given temporary responsibility for all other portfolios- including health, education and social services – until a full ministry is appointed. As required under party rules, The Labor caucus is expected to meet on May 30 to elect ministers with a swearing-in of the full ministry later that week.

The House of Representatives

At the time of publication, 10 independents have been elected onto the crossbench. Andrew Wilkie, Zali Steggall and Dr Helen Haines were re-elected and will be joined by 7 newly elected female MP’s.

With the exception of the seat of Fowler, the “TEAL” candidates have ousted sitting Liberal Members and have listed action on climate change and a national integrity commission as their top priorities.

The Green’s primary vote increased nationally by 1.5% and for the first time in the Australian Parliament, they have won 3 seats in the lower house.

Currently, Labor has won 32.8% of the primary vote, representing an 0.5% primary vote swing against the party across the nation. 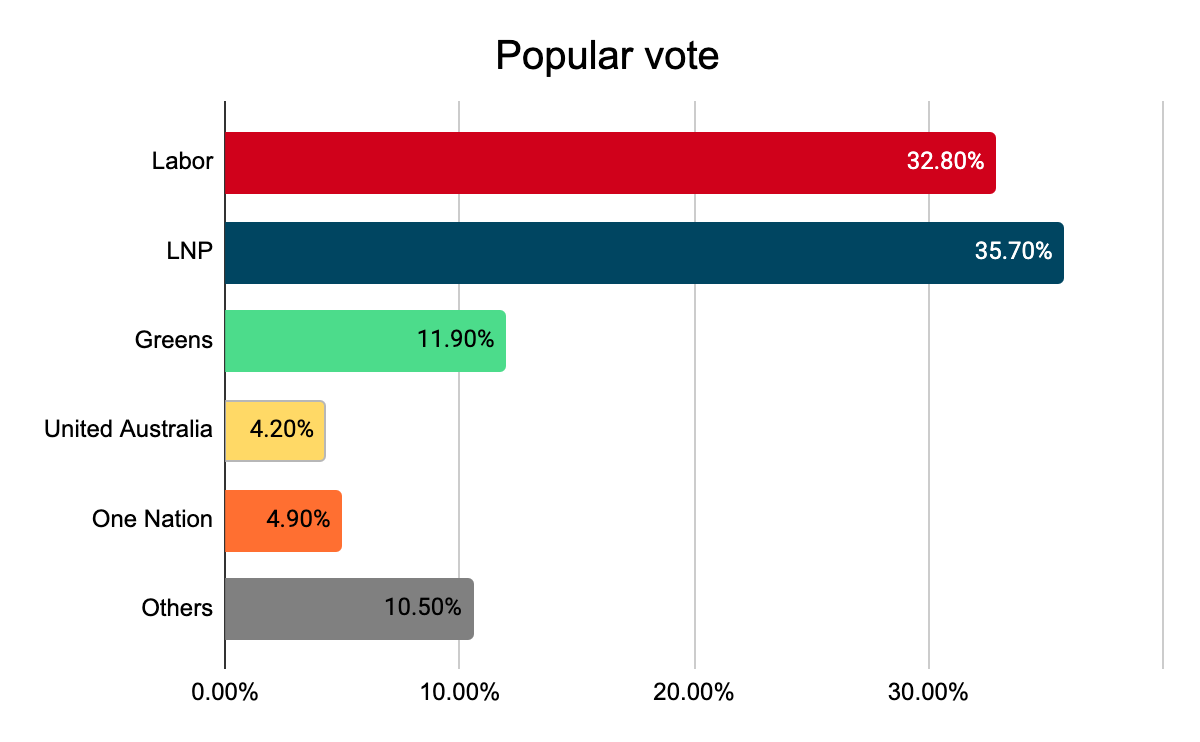 The following table depicts the House of Assembly seats that have been confirmed as changing parties.

The following table depicts the House of Representatives seats that are still in doubt. The party listed as the “Challenging Party” is the party currently in front in that seat.

While the final count is unlikely to be known for a few weeks, at the time of publication, the senate seats which have been confirmed are:

While the AEC has not formally confirmed the final senate results, it is likely that every state in Australia will elect two LNP senators, two Labor senators and a Greens Senator. The sixth senate seat in each state remains undecided.

In the Northern Territory, both the Australian Labor Party and the Country Liberal Party have won a senate seat each. In the ACT, Labor’s Katy Gallagher has retained her senate spot. For the first time in ACT’s history, an independent senate candidate (David Pocock) is likely to defeat the Liberal senate candidate (Zed Seselija).

The Albanese Government’s policy commitments will have a net aggregate impact of $7.4 billion over the forward estimates compared to the underlying cash balance outlined in the 2022 PEFO. The Government has committed to releasing a federal budget by the end of the year and the Labor Party’s election costings are available here.

A key priority for the Government will be establishing an independent National Anti-Corruption Commission, stating that the Commission will be well-resourced with the authority to investigate government ministers and bureaucrats.

Labor’s other priority commitments include:

Labor launched its Powering Australia Plan in December 2021 to address climate change. The plan contains a suite of policy measures aimed at creating 604,000 jobs and reducing Australia’s emissions by 43% by 2030 and net-zero by 2050.

The Labor Government has committed:

$440 million for schools to address the impacts of COVID through better ventilation, building upgrades, and mental health support. This includes:

The Albanese Government has committed to:

To find out more about Labor’s Buy Australian Plan and A Future Made in Australia, view Hawker Britton’s brief here.

Cost of Living & The Economy

An Albanese led Labor Government will:

To promote equality the Government will:

Albanese committed to increasing Defence spending, stating that it would be targeted and focused on:

The Government has committed: